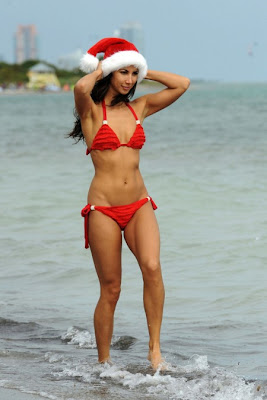 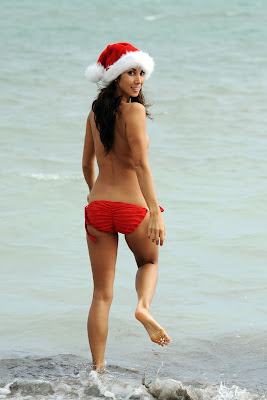 Looks like Mrs. Claus has been watching what she eats, and/or hitting the gym! Of course, Santa IS a rich, old dude...

I actually got some stuff that I needed/wanted this Christmas. I know it's not about what you get, but every so often it's nice to open a present and not get a fucking flannel shirt.
Junior Management was treated well by Nigel (our resident 'Elf of the Shelf") and Santa. It must be said though, that Nigel is obviously a Democrat, because his idea of good behavior is a bit more liberal than my own! :) Kidding! I have pretty good kids, and they deserved it!

We've completely three of the four stops on the Christmas Tour 2011. Last one is tomorrow, then I'm DONE! Back on the bike Tuesday...and it's supposed to rain! I guess I'll be getting wet and dirty!

Rode solo yesterday for a couple of hours. Nice little spin with a couple of efforts for fun. 65km was plenty!
We're also batting around the idea of doing a "New Years Day 100k" ride. If anyone is interested, let me know. I'll post more info in the next day or so, once we figure out specifics.

And on a serious note, please keep Justin Bristol in your thoughts. He woke up this morning, Christmas Day, to his house burning around him. Positive tip : he, his family, and pets all got out alive. Negative tip : EVERYTHING else is gone!
JB is a broke-ass college kid, a hard worker, a good rider, and a damn nice guy.
As you hit your knees tonight, say a word to whoever you choose, for Justin and his family.