Funny how motivation ebbs and flows.
Two weeks ago, I was super motivated. Rode A LOT of hours. Did some quality work. Felt good.
Last week, no motivation at all. Still rode double digit hours. Felt like shit, on and off the bike.

I'm feeling ridey again this week, but I still feel like crap. Personally, I'm blaming the fact that there's a three week old fruit of my loins in the house, and school started. I slept until 8am every morning through the summer. The baby arrived at roughly the same time school started, which means sleep got shot directly in the keester. I'm just tired...mentally and physically. TGoJR made the comment that basically said if there was a reason to be tired and have bad form, a new baby is probably it.

Anyway, I thought I felt okay last night, but just had nothing. I stayed with the lead group until 302, lost a contact, and just sat up and one-eyed it back to the house. This was on top of the TWO flats I had in the parking lot BEFORE the ride started. Maybe I should have stayed home...

This morning, my spirits were buoyed a bit. No, I didn't catch sorority rush again! Junior Management #2 and I had a perfect ride down on the riverfront. Big sun, empty trail and quality time. Not much better! 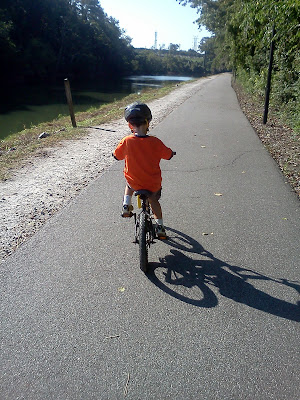 We rode 5 miles. As usual, he just killed it and never complained once! Ride with your kids people!

And this is just good stuff...

I like Rahsaan. I know Rahsaan. I talk to Rahsaan regularly. I consider him a friend. Rahsaan deserves better than how he's been treated by the cycling establishment. Dopers get welcomed back with open arms, yet one of the best riders in the country can't get a ride? I'd rather have a guy that speaks his mind and raises hell once in a while than some mealy mouthed pack fill, or a 'reformed' doper.
Good on you RB. Let me know if I can help!