Things are slowly coming around. No pain/discomfort when riding.
Got the CX shoes/pedals figured out. Still need to get the road setup 100% sorted. A repaired knee equals a different pedal stroke.
The wedges and insoles are set up for my old, jacked up right leg. It'll get sorted shortly. It would probably help if I actually got on the road bike...
Rode 4x last week...all on the CX bike.
All rides were fairly uneventful. At this point, I'm riding to ride, and get a little fitness back.
Tues/Thurs/Fri were pretty normal. Two at some sort of tempo, one hard, to see what's in the tank.
KL and I met Saturday morning, and did a nice, even, planless (is that a word?) ride.
It rained, but the temps were warm, as was the rain. Getting wet wasn't a big deal.
The PowerStation is interesting these days. Muddy...sandy...rocky...hardpack. Something for everyone. 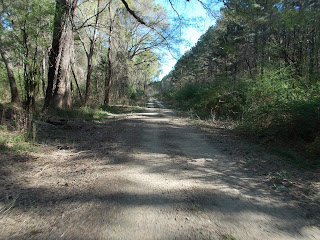 And the giant mudhole is now passable... 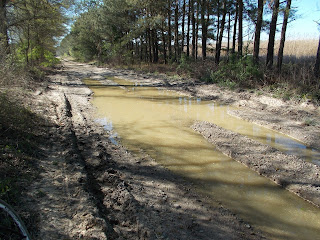 Far side...(left side coming in...right side going out) And don't be brave and try to ride the center. That shit is DEEP.
Also found a saddlebag out there. A Barracuda bag w/two two kits, and the normal flat change stuff. If you know who lost it, hit me up, and I'll get it back to them.
Be aware of the wildlife out there as well. I've seen plenty of hawks, owls, snakes, deer, turkeys, and turtles. Just pay attention. You're riding through their living area.

Sunday, I had the day to myself, so I got up late, and watched Gent-Wevelgem.


Fun final 50km or so.
And sad news from Gent...
Following a crash, Antoine Demoitie was struck by a race motorcycle. He was taken to hospital, where he died from his injuries.
Maybe this will be the impetus the UCI needs to reduce the number of "official" and press motos in races.
The LAST place any cyclist should die is DURING a bike race.

It's Spring Break around here, so morning rides are out for the week. I'll probably roll over to the group ride on Tuesday night...likely on the CX bike, or I'll cut it off early if I take the Ridley out.

Have a good Monday!