I'm riding tomorrow. If it hurts...it hurts. I need to get outside and get some sunshine on me. It'll probably be a short ride, and definitely won't be very hard, but I'll be on the bike.

Going back to the disc brake discussion...
There's are pluses and minuses.
Yes, there is a lot of stopping power. Yes, they'd be better with carbon wheels, as the chances of de-lamming a wheel would fall to zero.
That's about it for me.
In my eyes, it's marketing, and planned obsolescence.
Sorry, but they just aren't needed. One can see that a LOT of pro CXers are back on cantis this year...even in the mud/wet.
Here's why WE, as weekend warriors don't need them...
The VAST majority of riders could change caliper/canti pads. It's not hard to figure it out. Most can also adjust them if necessary.
Hydros? I'd be willing to wager a sizeable roll of bank notes that 90% of those with discs can't change the pads, adjust the calipers, nor bleed the lines.
If a person shows up to a ride and tells me that they just bled their brake lines before the ride, I'm going home.
A fair number of people don't take care of their bikes as it is. Discs are not something that one can say, "Oh, I'll do it next week...after this mountain ride..."
The other thing is ability. Disc brakes do not impart knowledge, nor ability. They do not allow you to do things that properly set-up calipers/cantis will do.
Someone in town stated that they're going to get discs because they will allow for later braking on descents.
That's REALLY not how descending works...
You just cannot stab the brakes right at corner entry. One must brake BEFORE corner entry, and roll the apex. Grabbing brakes, and scrubbing get handfuls of speed will cause crashes. The rider will eat it from too much brake, or get run over from behind by riders who are faster.
Modulation, and the learning thereof, is the key.
And road discs are failing. You won't read about it in the magazines because the rags are betrothed to their advertisers, many of whom make/market/use the brakes. Money talks.
I can tell you though, guys who are using them out in Colorado have had failures. Disc, caliper, and line failures from overheating.
One guy had a failure on a gravel/road ride...on a descent...and had to Fred Flintsone it across a T-junction intersection, and ended up in the woods on the other side. Not hurt, but his sphincter didn't un-pucker for a solid hour. Thankfully, there were no cars...
These instances are not rare, nor anecdotal.
My friends who ride out there? Calipers.
Will I get discs? Maybe. For now, I have too many wheelsets to warrant going to a different standard.
That being, if I go, it'll be on the CX bike first.
I'm not against them. Just do your due diligence, and ask yourself the hard questions before throwing down Benjamins. 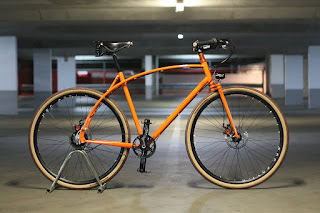 Townie bike by Primate. Yeah, it has discs. I can see them being useful on a townie, when one MIGHT have to stop quickly to avoid getting flattened by a sorority girl.

How about an Alu race rig? 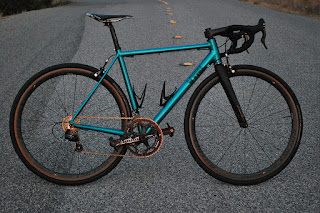 The guys at VYNL are channeling the old school. I like aluminum bikes. I like feeling what's going on...
Or how about a LUGGED stainless rig? 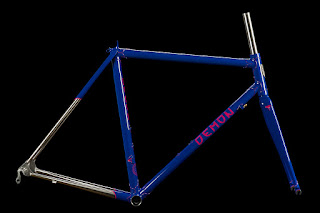 Hand-cut lugs, and a MAX fork from DEMON. Enough said...

And if you like/appreciate handbuilt things, check out the "Jet-Hot Double Down" from Bryan Fuller @ FullerMoto 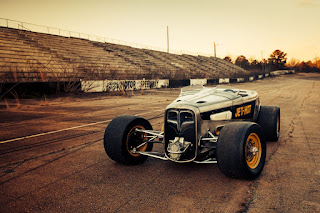 Custom. Handbuilt. Fully engineered. Beautiful. Crazy.
835hp and < 1000kg.
Better have it pointed in the desired direction of travel...

And with that, I need to go outside and gather leaves.
Have a Happy Thanksgiving!
Posted by MM at 10:39