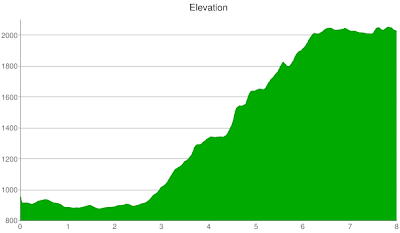 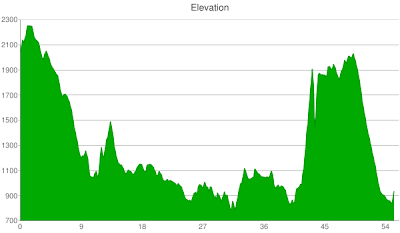 3 of us got up sort-of-early on Sunday, loaded into TVH's Subaru and headed to Tryon for a ride. Nothing quite like folding my 6'1", 185 pound frame into the backseat of an import wagon...more on this later.
The idea was to roll out of the park where the Fab 4th ride begins, go UP the Saluda Grade, down The Watershed, then find some loop to roll around on for 25 miles or so, then go back UP The Watershed, and bomb the descent of The Grade, back to the car. The plan was 50-55 miles. The best laid plans of mice and men you say...?

The first part of the plan was going swimmingly...then we deviated for the first time of the day...30 miles into the ride. At the store stop, the decision was made, after talking to a crusty local, to ride into Landrum, do a loop around up to Columbus and drop back into Tryon.
While the route may not have offered any BIG climbs, it was nicely rolling, through beautiful countryside. A couple of stunning valleys, and simply picturesque horse farms were well worth the deviation.
Rolling back to Tryon, Il Prof figured we'd barely have 50 miles, so I, in my finite wisdom, suggested we tack on a few by checking out Howard's Gap, just to see how full of shit folks who ride it regularly may, or may not, be. The first two sections of road went from nearly flat to 5-6%...nothing to really write home about.
A few Euro switchbacks led to the corner that would seal our collective fate. After a relatively flat right turn, the road opened up, and sucker punched all three of us squarely in the chops. To say that we struggled for the next 1.5 miles would be like saying that my Jack Russell struggles with higher math...an understatement at best. Il Prof said he saw 2.9mph on his computer at one point. I do not doubt this statement, and find that it may be optimistic!

The 1.5 mile asskicking AVERAGED 15.4%, and contained 4 portions that hovered between 25 and 30%. Not too difficult to see where those spots are on the profile.
Once at the top, the climb leveled out and we rode, for a WHILE, across the ridgeline, back to Saluda. Then, tired, soaked with sweat, and out of gas, bombed the descent of the Saluda Grade back to the car.
I then folded my 6'1", 185 pound frame BACK into the backseat of the Scooby, which made my hip flexors really happy with me. My trip to Renick yesterday bordered on Marquis de Sade treatment...
Not only did I get folded up into the back of the car, my Ridley did as well! Oh, the indignity... 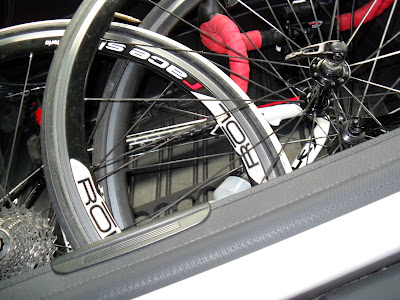 I guess only the 'team' bike Colnagos go on the roof! 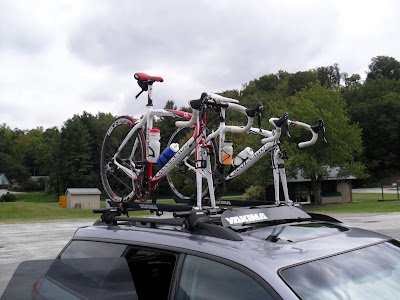 It was fun, and I'd do it again this coming weekend if the H.O. would let me out of the house! It was what a ride should be. Time spent outside, on the bike, with friends. There was no negativity, no complaining, but plenty of big smiles/laughs. You know, the reason you go do something like this...
Posted by MM at 07:57