Two solo rides over the weekend. Probably for the best.
Futbol was LATE on Saturday, so I rolled out of the sack, and got on the bike relatively early.
Did the normal CX+ loop. Felt really good, and the Salsa seems to be running perfectly.
Had to slow down on The PowerStation a couple of times, as people have discovered that it's a good place to walk their dogs off leash.
First time was for a bully breed that had some sort of haggard skin issue. Poor fella...
Second was funny, and played with the imagination of my inner 8 year old.
I was going sort of hard, and my glasses were spotted up with sweat when I glanced ahead and saw something big, black, and furry come bounding out of the woods. I saw no one else around.
So the little peanut I call a brain started working. That's either a big, fuzzy dog, or a black bear.
Now, before you say, "There aren't black bears here....", I will point you to the DNR reporting website.
Bears in the Upstate. Bears in the Lowcountry. Odds are, there are a few roaming the deep woods in the Midlands...
Anyway, once a little closer, I saw a woman, and the big, black, furry beast ran right to her. Yeah...dog.
I stopped to say hello, and give the dog a scratch. He was big. A good boy too.
Rolled up thru downtown, and home. Good morning on the bike.
It was lovely outside Saturday morning too... 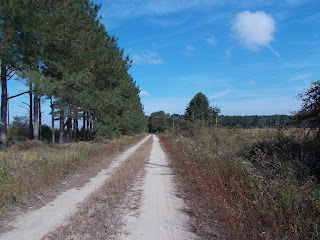 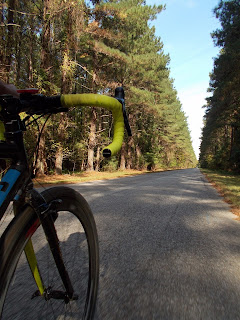 Sunday, I woke up in a generally foul mood. Don't know why. Impending super Moon maybe...
Didn't really want to ride with anyone, so I jetted, and did a solo ride, and pushed a little to push out the bad stuff. A little pain tends to do that...
I was rolling, just turning it over w/o a lot of difficulty. I got to a crossroads, and saw nothing coming either way, so I ripped across. In my haste, I neglected to see a crater  pothole. I got the front over it, but couldn't life the back in time. Just shellacked it. Thought everything was cool, until about a km later.
Yep...pinched the tube.
Quick change, and I was on my way. Sadly, the CO2 cart in my bag was a 12g (who buys 12g CO2?), so the rear tire only had about 75psi in it for the remainder of my ride. No matter...I was out n the sunshine.
Rolled home via 12th St., thru downtown, and up into the 'hood.
Good ride, and it DID, in fact, change my mood.
The remainder of the day was spent with Junior Management. Cars got washed, footballs got thrown, and the house got decorated for Halloween.
Solid day. Probably ride solo a bit more in the coming weeks. Don't have to rely on anyone but myself.


Brilliant sprint. And little makes me happier than watching Cav have a sook.

Zonhoven was yesterday as well...

And the creak on the Ridley stopped. Funny how well one's bike works when Shimano parts are installed. Yeah, 7800 cranks are "old tech", but they are lighter, stiffer, and don't look like a club foot. They were the standard years ago, and still work today.
Keep your fancy shit. 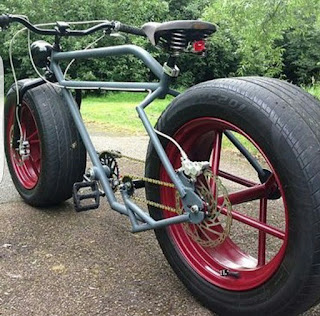 Your fatbike is weak. 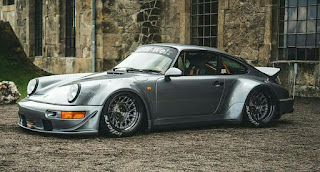 And remember, Christmas is coming. I'm very easy to shop for...

Probably do one night ride this week, as it's truly an enjoyable ride. The rest? Juan Solo.
Have a good Monday.
Posted by MM at 10:17